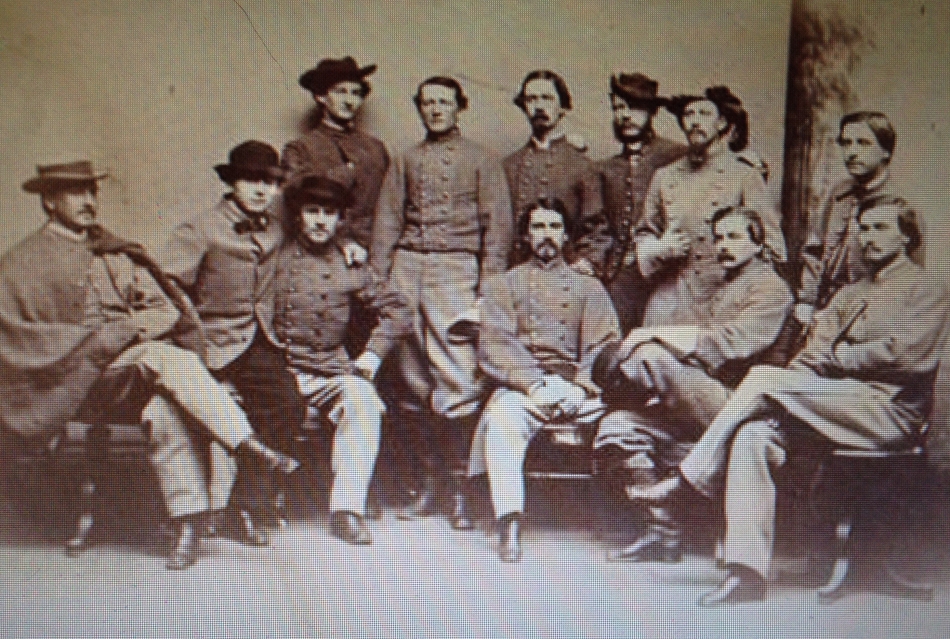 John Singleton Mosby’s 43rd Battalion, a Confederate partisan ranger unit fighting under Confederate Cavalry General J.E.B. Stuart, led a highly successful campaign to disrupt Union army occupation in northern Virginia. Many of Mosby’s battalion men were drawn from Loudoun and other northern Virginia counties in which the battalion operated during the war. Their home counties were their war counties.

The majority of Quakers in Loudoun County were caught in the contradictory position of supporting the cause for which the Union army fought, as well as living among friends, neighbors and fellow Virginians whose alliance was with the Confederacy.

How would they respond to such a challenging dilemna? The moral principles of their faith required tolerance and pacifism. Human nature, as well, leads us to accommodate friends and neighbors. There was an impulse to do what it took to survive the war as well as the moral desire to be good and helpful friends, including to non-Quaker neighbors. Living the pacifist and anti-slavery principles of Quaker faith must have caused Loudoun County Quakers tremendous moral conflict that Southern non-Quakers did not experience. Their allies were also their enemies.

Here is the segment in Scott’s book, found here, in which he writes of an incident between some Mosby Battlion rangers, Quakers in the Circleville area, and Union cavalrymen attempting to find the Confederate Battalion men. It gives an example of cooperation between Quakers and Confederates. It does not address whether that cooperation was the result of duress or pressure on the Quakers. Also: were the Quakers involved in this scene acting in a way in which they hoped their cooperation with these aggressive local Confederate fighters would some day protect their own interests and shield them or their families from abuse? Every day of this war they had to negotiate a violent, precarious and shifting alliance.

CHAPTER XVI.   ADVENTURES BETWEEN THE LINES OF THE OPPOSING ARMIES.

Upper Fauqier, July 30th, 1863.   Dear Perot, — I take my pen today to give you a rapid survey of our operations from the time that the Confederate army crossed the Potomac until the time that the Rappahannockagain became the dividing line of the hostile armies. It forms a novel and interesting chapter in Mosby’s military life, and shows how fertile  he is in expedients when pressed by difficulties.   After failing to connect with Stuart, Mosby returned  to Middleburg, where he collected about thirty men,and crossed into the Valley for the purpose of joining General Lee in Pennsylvania. He struck for Mercersburg, where he understood a portion of the Southern army could be found, but, on reaching  that place, discovered that it had moved. Finding himself in a hostile country with a mere squad of soldiers, and ignorant of the  position of [Confederate General] Lee’s army, Mosby determined to return to  Virginia, but brought with him about three hundred beef cattle, which he turned over to the Confederate States’ commissary at Winchester. At that point he heard of the defeat of our army at Gettysburg. From Winchester Mosby visited Richmond on official  business, and on his return appointed a meeting for his  command at Rector’s Crossroads.But the advance-guard of [Union] General Meade  having reached that point, he  was compelled to change the rendezvous to Rectortown, where he collected about thirty men. In order to  reach  the rear of the invading army, he made a detour by way  of the  Plains, and camped that night in sight of the  [Union Army] 11th Corps, which was   about Mountsville, in Loudoun  County. On his way to this point he met Bush Underwood who, with two men, had captured at Benton’s Ford of Goose Creek a lieutenant colonel, a major, and  an orderly. Early the next morningMosby captured three heavily-laden sutler wagons and forty-five prisoners, and while  thus engaged fell in with [Union] General Carl Schurz, who was  riding out, and chased him with hot speed into his camp. The next day the horses were divided among the men, and the prisoners were put in charge of Tom Lake, with  a detail of five men, to be conducted to  Culpepper Courthouse — a task of no little difficulty when we remember that the country through which Lake had to pass was occupied by hostile troops.   These results got the citizens [near Mountsville] (who are chiefly Quakers)  into trouble, for the next morning the Yankees,infuriated, sent out and arrested many of those living in the vicinity. A very ludicrous occurrence happened in this connection, for several of Mosby’s men who had ingratiated themselves with the Friends [Quakers] were captured along with  them.  But the  boys all got Quaker hats  and Quaker coats, and it was laughable in the extreme to hear them, with sancti-  monious looks, theeing and thouing the Yankees. But it all passed off  well, for the Quakers were  soon turned loose, having found no difficulty in establishing their innocence.   Two days later Mosby started from”Camp Spindle”  which he had established in the Bull Run Mountain since the occupation of Fauquier and Loudoun by the  Northern army, and returned to its rear. Near Circleville he came in sight of nine wagons prepared to forage among the Quakers, and such was the feeling of security that no guard had been deemed necessary for their protection. The wagons were captured and set on fire, and with fifty-six horses and mules and twenty prisoners  Mosby returned to the Bull Run Mountain. This affair  got  the Quakers again into trouble, and another order  was issued for their arrest.   Mosby next began to operate farther to the front of   Meade’s army, between Salem and the Plains. As he was marching from his mountain fastness to the latter  place, he captured two [Union] cavalry-men loaded with the spoils  of a poultry-yard. By them he was informed that a  large number of mules had been turned to pasture near  The Plains, guarded by forty artillerists. Upon these he made a swoop, and, in full view of the enemy’s camp,  carried off mules and guard to his mountain rendezvous,  laughing at the infantry who were sent in pursuit of him.   The untiring partisan returned in the evening, and,  concealing his command in the woods, took with him  Fount Beattie and Norman Smith to a hill-top,and presently saw two officers ride out from camp. When they had advanced far enough for him to get in their rear he  charged them, and for three miles the exciting chase continued. With bloody spurs,  the bare-headed officers  made for a wood at the extremity of a lane into which  they had entered. But as they approached it they came  upon  two ladies, who, appreciating the situation, drew  up their horses to  witness the sport. As Mosby and  his two companions passed them, they  cheered with waving handkerchiefs, and pointed out the direction which  the fugitives had taken. The race was then soon brought  to a close,  and the two Federals were taken to the Bull  Run Mountain, from the crest of which could  be plainly seen  the Northern army camped in The Plains below.