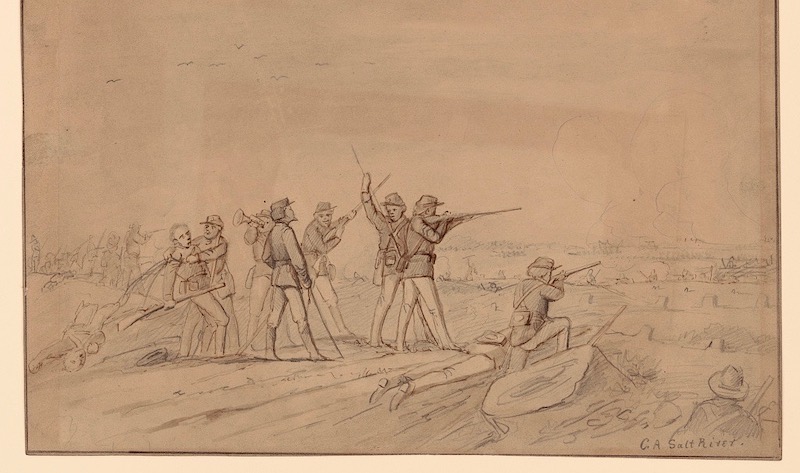 The perception of 19th century Quakers throughout the United States was that they were pacifists and, to a great extent, abolitionists. During the Civil War, some Northerners couldn’t help but point out: Quakers had agitated against slavery but when war came along, they let others do the fighting.

Less than a month before the end of the Civil War, a western Indiana newspaper, the Vincennes Western Sun, printed an attack on the perceived hypocracy of high-minded Quakerism. Indiana had a good share of Quaker immigrants, some of whom had moved there from Loudoun County, Virginia. Earlham College was in Indiana, and that Quaker founded college was popular with Loudoun County families.

The Vincennes Western Sun was edited and published by George E. Greene. He either wrote or re-published a harsh indictment of Quakers on the front page of the paper’s March 11, 1865 edition (transcript below):

The impudence of the Quakers claiming exemption from military duty and the draft on the plea of “conscientious scruples” has been commented on and noticed frequently. It is one of the coolest things of the day. As a correspondent of the Cincinatti Equirer says, no man who is intelligently and consistently opposed to the war will do anything to excite war. But it can hardly be denied that many under the name of Quaker have spent their lives in stirring up strife by means of the abolition question who, now that the result of their doings comes before them in this bad form, profess to be conscientliously opposed to the war! They, of all others, should be forced into the ranks, sans ceremony, sans pay, and sans cotton and other privileges.

A different perspective is given in the “Chronicles of War” columns published in the National Anti-Slavery Standard newspaper, June 22, 1861. “The Quakers in Maryland and Virginia” was included in that date’s edition. First, the article focuses on Maryland’s Quaker community, across the Potomac River from Loudoun County, Virginia:

THE QUAKERS IN MARYLAND AND VIRGINIA

Should our army march up on the Rockville Turnpike from Washington toward Harper’s Ferry, every step would be among traitors. But should they go up the Brookville pike, almost parallel with it, and leading out past Mr. Blair’s residence, every step would be through a comparatively friendly land. This difference in the sections of Montgomery County is to be chiefly attributed to the living branch of Quakerism which fortune has cast into that County.

Perhaps the finest Quaker (Hicksite) settlement in Maryland is to be found at Sandy Spring, about 25 miles out north-west from Washington City. Wealthy and successful farmers, supporting free schools, a lyceum for lectures, and a valuable circulating library; employing no slave labor, nor even hiring slaves, because the wages must go to the owners of men, these peaceful settlers have distanced those of all other parts of the County, and their influence has extended to other communities. In the early days of Maryland their fathers settled there and accepted the eternal testimony against slavery; to it they have unanimously adhered. This is the ancestral centre of the Stablers, Hallowells, Brookses, Farquhars, and other noble families.

When the present troubles began, the Southern Wrongs party held a meeting at Rockville, and very much to their dismay, the entire tribe of Quakers , “never before known to attend a political (!) meeting,” presented themselves. They were met with a ferocious growl; but it was of no use: secession was paralyzed. Immediately after the Baltimore street conflict, the spirit of secession swept like a tornado through that State; but the Quakers did not bow nor bend to it. They were threatened with a mob. They met, and decided that, alive or dead, there they would remain. And they do remain there, sheltering nightly scores of refugees from the South, and, though they may not take the sword, ready to defend, in every way consistent with their testimonies, Liberty.

The article then turned to Virginia Quakers in Loudoun County:

Not very different from this is the case with Loudon County, Va., just across on the Southern shore of the Potomac. It has several flourishing Quaker (Hicksite) societies, which have done much toward making it a region of free labor. This is the region of the Janneys —all friends of freedom. Samuel M. Janney here met and annihilated the Rev. Dr. Smith, President of Randolph Macon College, when he made a tour of that State, demonstrating the divinity of slavery, who was met by an indictment when it was found he could not be met by argument. Samuel Janney has here, with impunity, published several forcible arguments of slavery. It was in an adjoining neighborhood that Mr. Underwood was able to make so brave a stand for liberty.— Cor. Tribune .

The Indiana Roll of Honor, published 1864 during the war, by David Stevenson, compiled Indiana regimental war experiences, including from men in the 19th and 20th Indiana Volunteer Infantry Regiment. Those regiments both spent time in Loudoun County and its Quaker communities.

One un-signed anecdote from the Roll of Honor book was written by an infantryman in the 20th Indiana Volunteers. He wrote that after the 2nd Battle of Manassas, the 20th Indiana spent 6 weeks in Alexandria, presumably at the hospitals and camps located there. Then by early November the 20th Regiment is once more on the move. “A beautiful country met our eyes along the route. Tired with gazing on the never changing green Virginia pines, the men looked with delight on the huge chesnut trees, towering oaks and black walnuts… .”

The same Indiana trooper’s further recollection is below. He mentioned “Quaker Church,” but there is no community called “Quaker Church” in Loudoun county. It likely is a reference to Lincoln, which at that time was called “Goose Creek.” The Quaker meeting in the village was named Goose Creek; in fact, the village was often listed on maps as “Goose Creek Meeting.” In other words, the village had the name of its “Quaker church.” It is a safe assumption to make that the writer was referring to Quakers in the Lincoln area. If only we could know who the “old patriarch” was who guided the Union infantry through “by-paths across the country.” Yardley Taylor? William Tate?

The following year, the 19th Indiana Regiment marched through Loudoun County, Virginia after fighting at the July 1-3, 1863 battle of Gettysburg. One of the men wrote: “On the morning of the eighteenth of July the first corps crossed the Potomac at Berlin, and camped that night at Waterford, in Loudon [sic] Co., Va., which proved to be a village of loyal people, who gladly welcomed back the old flag and opened their houses cheerfully to the heroes of Gettysburgh [sic]. On the next day the march was resumed towards the Rappahannock river…”

Both Loudoun County Quaker villages, Lincoln and Waterford, were remembered by Union army troops for their hospitality and support. However, support of the Union cause cost Southern Quakers dearly; the price of their principles bought them the title of “traitor” from secession neighbors and fellow Southerners.

0 comments on “Indiana view of Quakers during the Civil War”