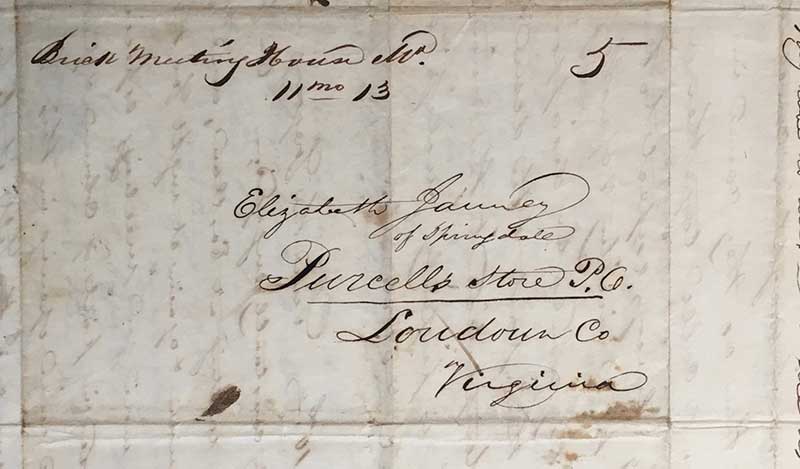 Elizabeth Janney, like most 19th century women, didn’t leave many public records. However, we can learn something about her life from occasional documents and private letters.

Elizabeth married Samuel McPherson Janney in 1826, in Alexandria Meeting. She and her eminent husband were close partners. Samuel traveled frequently – almost continuously on a trip or planning a trip or just back from a trip. One good consequence of that fact is that conversations between husband and wife, normally held face to face, were by necessity written in correspondence, and thereby saved. Samuel Janney kept drafts of most of his letters, so we know not only what he wrote, we have correspondents’ letters back to him. All this gives a more complete picture of the Janney family’s world.

One letter Elizabeth wrote her husband was from Springdale, the boarding school for girls as well as being the Janney family home, on September 27, 1853. Part of her letter states: “…Cornelia [daughter] desires me to say to thee that our school for the coloured children has been well attended since thy absence. Last first day [Sunday] morning they had one young man. I think there is an increasing interest felt in it by the coloured people. If they cannot make much progress in learning in the short time allotted them to study, if it only convinces them there are some white people who feel a disinterested desire to do them good, such efforts I think will have a good effect upon their minds.”

We have another glimpse of Elizabeth from a letter written to her from Samuel, who was in Pennsylvania, November 7, 1848:

This evening at twilight while sitting in silence, my thoughts were turned towards home with earnest desire for the welfare & preservation of its beloved inmates, & I felt drawn by the ties of tender affection to resort to this mode of communion with thee, as I am denied the privilege of enjoying thy society. Methinks I behold you seated around the table in the classroom, the children engaged in reading, while thy busy fingers are, as usual, employed in providing for the comforts of the domesic circle. How I would love to join you this evening & partake of your fireside enjoyments, but I must be content with the service assigned to me as I believe by the author of all good, and truly I have cause to be thankful for his care and protection, as well as for the seasons of spiritual enjoyment he has been graciously pleased to grant me.

The complete letter can be seen here; it continues on with news of Samuel’s travel, plus requests for Elizabeth to write to him, to arrange a conveyance for his return home, etc. Her caretaking was, indeed, constant.

During her husband’s frequent absences, Elizabeth oversaw her Springdale household of children and school employees. Elizabeth was very active in her Quaker faith; Goose Creek Meetinghouse was a short walk away from Springdale. Home responsibilities included sewing and repairing all clothes by hand, making meals and overseeing food raised and preserved within the home, as well as tending, feeding and keeping livestock healthy. Children, including schoolchildren, sick or even simply homesick or troublesome, had to be comforted. A day’s tasks surely left time for little else.

But there was a greater, more personal, burden on Elizabeth. Quaker records show she and her husband lost five of their eight children to early deaths. The couple’s eldest child, John, lived to adulthood but died in 1858 at age 31, himself the father of two very young children. An earlier child’s death had come in 1830, when two year old daughter Ellen died. Then a second daughter, Jane Eliza, died at the age of one, in 1832.

A third daughter, Cornelia, was born in 1833. She lived a long, productive life, including as a schoolteacher both in Lincoln and in Nebraska on the Indian reservation while her father was Superintendent. She devoted her life to service within Goose Creek Meeting.

In 1834, Elizabeth had a son following Cornelia’s birth, named Anthony. He died shy of his third birthday.

Another daughter, Mary Ann, was born in 1837 and lived to adulthood. She married William Tate Shoemaker and it was Mary Ann who became final keeper of many of the Janney family letters and documents, some of which she donated to Swarthmore College or the Library of Virginia, Richmond. Mary Ann, like her mother and sister, Cornelia, devoted her life to work withing the community of Lincoln and Goose Creek Meeting.

Two years after Mary Ann’s birth, Samuel and Elizabeth had a son, Abijah, (named for Samuel’s father) born in 1839. Abijah died in 1842. A son was born two months after Abijah’s death; Phineas, thankfully, lived to adulthood. (In 1868, Phineas married a non-Quaker, Clara Connelly, which caused a bit of a kerfluffle within Goose Creek Meeting. But all ended well, with Phineas and his wife eventually moving and joining Alexandria’s meeting. Phineas died in Alexandria in 1914.)

Compassion was part of Elizabeth’s work day. She acted on her anti-slavery beliefs. Her daughter-in-law, Eliza Finch Janney Rawson (also a teacher), who had married the Janney’s eldest son, John, mentions her beloved mother-in-law in a Friends’ Intelligencer article written May 27, 1899. Eliza’s excerpt primarily focuses on Oscar Carey, a free black man who worked for the Janneys, but it includes admiration for Elizabeth Janney. (Eliza wrote a careless comment regarding Oscar, writing he “was a man of more intelligence than the most of his race” – an attempt at commending Carey’s intelligence but to our ears patronizing and racist. Her humorous anecdote is fun to read in spite of that one statement.) At the end of the column, Eliza mentions her mother-in-law’s preparing food for “oppressed humanity” escaping on the Underground Railroad:

Another example of Elizabeth Janney ‘s temperment – and her family’s – comes from 104-year-old former enslaved woman, Judy Gaskins. Gaskins was interviewed in 1880 by an Ohio newspaper journalist. The interview, found here, is full of detail explaining the cooperation between Quakers and enslaved blacks seeking liberty. Gaskins remembers back to when she lived with the Janneys in Lincoln, Virginia. When asked by the journalist how long she had been settled in Ohio, she replied:

“Well I came here the year President Buchanan was elected. That was in 1856. I lived in Virginia with that noted Quaker and might fine man, Samuel M. Janney, some time before I came here. He wanted a cook, and I told him I didn’t think I could suit him, but if he liked I would come and stay until he could do better. I went, expecting to stay two or three weeks and I stayed eight years. The longer I stayed, the better I liked them, and the better they liked me. Oh, I tell you, honey. Mistress Janney was a precious woman! I was sick there a long time, and she nursed and cared for me as if I was her own mother.

And while I lived there I bought my daughter Annie of her master Enoch Garrett, for $300. I earned part of the money myself and the young ladies, Mr. Janney’s daughters, helped me a good deal. Annie was nine years old then. We came to Waynesville in the fall of 1856, bringing a leter of recommendation from Jonas Janney Sr. (father of young Jonah Janney of Waynesville) to Hannah Hogue a well known Quaker lady who then lived there, but she has long since been gone to glory…”

Elizabeth was as devoted to education as was her husband. She taught at Springdale, as well as the “First Day School” connected with Goose Creek Meeting. She raised her daughter, Cornelia, to be a teacher; Cornelia’s name turns up as one of the first teachers for the “Colored School B” in Lincoln which opened soon after the end of war in April, 1865. Elizabeth Janney used an inheritance from her brother Samuel Hopkins Janney to pay for property in Lincoln, and then sold that property for $1 to trustees of the “colored” school. Because of laws disallowing married women seperate legal ownership of property, Elizabeth had to use her husband, Samuel M. Janney, to make the legal transaction on her behalf. We can see from the deed of this sale that there was a building used as a “colored” school on the property, the “Colored School B.”

Clerks’ Office of the County Court of Loudoun County to wit

The foregoing Trustees Report of Sale was this day

Received in said Office and admitted to records.

This deed made the 25th day of October in the year one thousand eight hundred and sixty seven between Samuel H. Janney surviving trustee of Elizabeth Janney the wife of Samuel M. Janney of the county of Loudoun and State of Virginia of the one part and Samuel M. Janney, Same  Thirston Nichols, James M. Hoge, James M. Ball, William Neuman, Edmond Parker, Jack Neil and Jesse Moton (the first last names being colored men) Trustees for the colored school at Lincoln of the County of Loudoun and State Virginia of the other part Witnesseth that in consideration of one dollar the said Samuel H. Janney Trustee for Elizabeth Janney doth grant unto the said S. M. Janney, T Nichols, James M. Hoge, James M. Ball, William Neuman, Edmond Parker, Jack Niel & Jesse Moton. In trust for the use of the colored school at Lincoln heirs and assigns from the following property to wit A certain lot of land on the brow of a stony hill in Elisha Janney’s line thence W 88 Eight poles to a stated in stone in said line thence W19 ½ E on pole to or Spanish oak thence W 58 ½ W 6 6/10 poles to a stake or stone, thence S 219 W 5 5/8 to the beginning containing twenty one off and the said lot with the School house thereon is conveyed to the said Trustees for the use of a colored school and when not in use for that propose the said Trustees may permit it to be used as a place for Divine worship by any religious society. The said Trustees or the survivor of them are hereby authorized to convey the title to this property to the Trustees or their successors and they shall also have power to sell & convey this property and invest  the proceeds in other real estate for the same purposes. And the said Samuel H. Janney Trustee of Elizabeth Janney covenants that he will warrant generally the property hereby conveyed that he has the right to convey the same to the grantee that the grantee shall have – possession there of free from all incumbrances and that he will execute such further assurances of the same as may be requested.

Witness the following signature and seal

The original deed, shown below, is in the Loudoun County Courthouse Historic Records office, in Leesburg, VA.