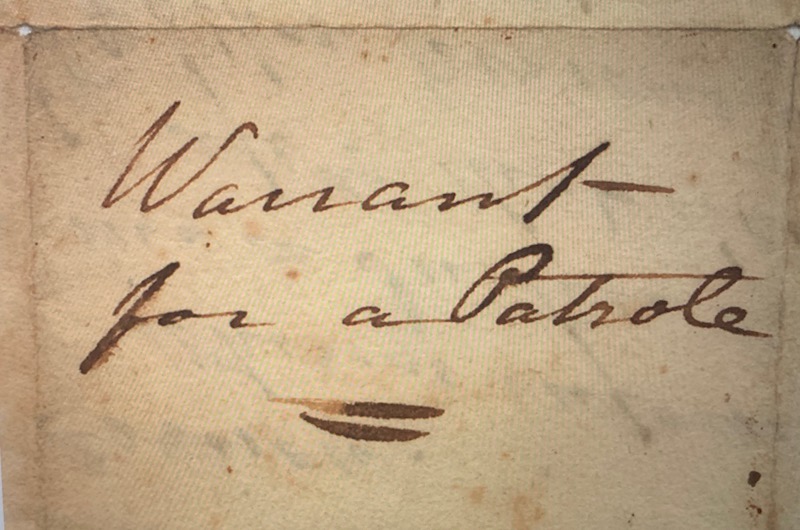 “…the paddy rollers would come an’ horse whip every las’ one of ’em, jes cause poor souls were praying to God to free ’em from dat awful bondage.” – Quote from Virginia ex-enslaved Mrs. Minnie Fulkes’ in her Work Projects Administration interview.

Here are two pages of the 1937 interview with Petersburg (a town 25 miles south of Richmond) resident Minnie Fulkes, archived at the Library of Congress. Her recollections of slavery cover many topics, including the continual fear of encounters with men out on nightly slave patrols. Fulkes’ interview makes for grim reading. However, on the transcript’s second page shown below, Fulkes recalls how bondsmen once got the best of cruel patrollers:

Loudoun County, along with virtually every southern county in every southern state, had slave patrols. We better understand the pressures on Quaker communities of western Loudoun when we remember how pervasive, pro-slavery laws dominated the culture.

A list of Loudoun County, Virginia patrollers, 1801-1861, compiled by the Loudoun County Courthouse Office of Historic Deeds and Records, shows how many men served on patrol. Everyone in Loudoun County would have been familiar with the patrollers on this list – they were neighbors, farmers, kinfolk. The men were fulfilling a routine, civic duty. It might be time for our history of policing enslaved populations to receive more study.

This September 2, 1826 Loudoun County warrant ordering a slave patrol, partially shown below, because “an unlawful assembly of slaves & other persons are frequently held in this neighborhood, contrary to the Act of Assembly…“

Fear pushed the demand for slave patrols. White citizens didn’t want their enslaved population to rise up in violent revenge against the centuries of exploitation and abuse. Fear of rebellion increased after Nat Turner’s 1831 slave revolt in Southampton County, Virginia, leading to even harsher laws. But surprisingly, another result of Turner’s rebellion was that several Virginia counties, including Loudoun, petitioned the Virginia legislature to abolish slavery. The effort led nowhere.

Professor Sally Hadden, of Western Michigan University, speaks at the beginning of this six minute video about Loudoun County’s own Joseph Trammell and descendant, Elaine Thompson. Dr. Hadden explains how “freedom papers,” such as Trammell’s, were carried by freemen at all times. If enslaved, the individual had to have a “pass” from their owner, telling why they had permission to be out and about. If stopped and questioned, the papers were shown to patrollers. (White) citizens had a right to stop and question any Black man or woman, enslaved or free.

So, who were the patrollers? According to Sally Hadden’s insightful book, Slave Patrols – Law and Violence in Virginia and the Carolinas, patrollers were not in short supply.

Hadden explains that patrols were mandated by state law and organized by counties, serving a civil/military function. Though the activities could overlap, patrollers weren’t the same as “slave catchers,” who made a living from capturing escaped bondsmen/women and claiming reward money. Patrollers might indeed come across escaping bondsmen, but if so, that would be a consequence of the patrols’ routine, nightly rounds.

Patrollers were paid from county taxes. Many – or even most – patrollers came from their county’s militia muster rolls. Hadden writes that by 1792 in Virginia a man, aged 18-45, serving in a militia was automatically qualified to perform patrol duties. But, not all men wanted patrol duty, most in fact, did not. To have a recurring duty to be up all night, roaming around neighboring plantations and roads, going in and out of slave quarters, counting who was asleep and who was missing from their bed, was an onerous chore that didn’t suit all men. Plus, men on patrol had to rise in the morning to work; missing a night’s sleep was a hardship. But for some individuals, patrolling was their primary paid employment, so was worth the time and effort.

For religious reasons, Quakers refused militia duty. They either paid a county fine or were jailed for not complying with militia requirements. However, Quakers would suffer a worse fate if they did join a militia: they would be turned out of meeting. Yet, from Minnie Fulkes’ description of “paddy rollers,” it’s unlikely even the most lapsed Quaker would have had the background or camaraderie with non-Quaker neighbors necessary for nightly patrol.

Since patrol duty typically took place from dusk to early morning. Sally Hadden’s book draws a correlation between patrol “night riders” and the Ku Klux Klan which sprang up after the war’s end in 1865. The KKK became more and more violent, a fact that separated it from earlier slave patrol duty – few slave owners would condone patrollers seriously harming or killing their human “property.” If county patrollers did in fact kill a bondsmen, the county was liable for the cost of that lost “property.” (Volunteer patrollers had fewer legal protections if they physically injured a bondsman.)

Current political and civil rights’ movements empasize how some of the issues surrounding modern police forces lead from our nation’s history of slave patrols. An historic example can be found in John Capeheart, Norfolk, Virginia’s constable. He wrote about his patrolling job:

“It was part of my business to arrest all slaves and free persons of color who were collected in crowds at night, and lock them up. It was also part of my business to take them before the Mayor. I did this without any warrant, and at my own discretion. Next day they were examined and punished. The punishment is flogging. I am one of the men who flog them. They get not exceeding thirty-nine lashes. I am paid 50 cents for every negro I flog. The price used to be sixty-two and a half cents. I am paid fifty cents for every negro I arrest, and fifty cents more if I flog him. I have flogged hundreds. I am often employed by private persons to pursue fugitive slaves. I have been thus employed since 1838. I never refuse a good job of that kind.” (quote taken from Slave Patrol, by Sally Hadden)

After reading Constable Capeheart’s matter of fact explanation of his job, no further comment is necessary.