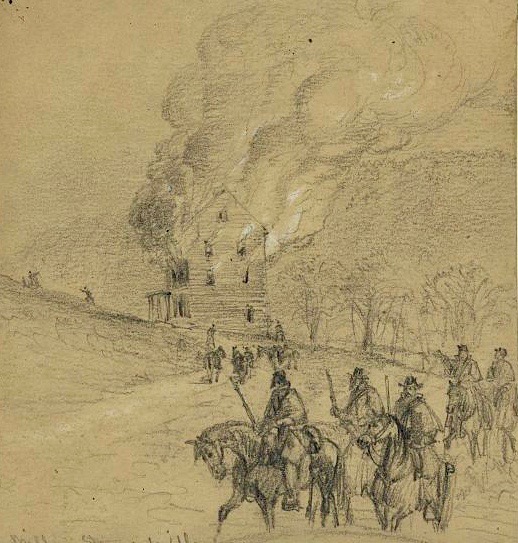 Living in Virginia at the start of Civil War meant that Quaker citizens had decisions to make: which side were they on? Or more importantly: were they on either side? Yardley Taylor’s nephew made the decision to fight for the Confederacy. Kirkbride Taylor (1840-1913) was a son of Nancy Taylor and her husband and cousin Benjamin Franklin Taylor. When war came in 1861, the majority of young Quaker men struggled with various ways to avoid serving in the Confederate army. Kirkbride was an exception: he embraced the fight.

Kirkbride Taylor made a choice to enlist in the 8th Virginia Infantry. The 8th VA Infantry was full of local Loudoun boys and men, mustered out of Leesburg, Virginia. Kirkbride enlisted in July 1861 and stayed throughout the entire war with the 8th VA. He fought at Gettysburg and on July 3, 1863, the last day of that three day battle, Kirkbride participated in Pickett’s Charge, surviving being shot in the head. To recover from his injury, it is likely he returned to the family home near Lincoln since he is shown “absent” for July/August 1863, rather than listed as in hospital. Kirkbride Taylor suffered three injuries during the four years of war, recovering from each and returning to the fight.

By 1864 Taylor had been promoted to 2nd Lieutenant and ended the war as a 1st Lieutenant. He not only survived but did well by the terms of war, showing “valor and skill.”

However, there was a price to pay for breaking the Quaker committment to non-violence. When the Civil War ended in April 1865 Kirkbride Taylor returned home. Years of war had injured him physically but also must have brought emotional changes. The religious consequences of Kirkbride’s military service can be see in Goose Creek Meeting minutes (transcript below the image):

Transcript: “The committee appointed in accordance with the reccommendation [sic] of the Yearly Meeting, in regard to violation of our discipline in regard to military services, reports that they have had an interview with Kirkbride Taylor, and that he stated that he owed no allegiance to the meeting, and did not desire to be a member. Elisha Janney and Thomas Brown were appointed to prepare a testimony against him and produce it at next meeting”

Goose Creek meeting September and October minutes record a follow-up to the interview with Kirkbride. The months’ long religious procedure must have caused anguish within the close, inter-related community. (Transcript below the image:)

Transcript: “9th mo 1866  At Goose Creek monthly meeting held the 13th of the 9th mo 1866 the representatives were present.   One of the representatives to the Quarterly meeting report they all attended.  The friends appointed to prepare a testamony against Kirkbride Taylor, produced one which was approved and signed, and Asa M. Janney was appointed to furnish him with a copy thereof, and inform him of his right to appeal, and report to next meeting.  Then concluded.”

“10 mo 1866   At Goose Creek monthly meeting held the 11th of the 10th mo 1866 the representatives were present.   The friend in Kirkbride Taylor case reports that the service has been performed.  Then concluded”

The Quaker discipline, with a belief in non-violence, had been sorely tested by the Civil War. The war brought an end to slavery – a matter for rejoicing. But here was a beloved but, literally, rebellious son – and nephew, cousin, and friend – from a prominent local family – a family with strong abolitionist beliefs. Kirkbride Taylor not only fought in the war, but fought for the side upholding slavery. Now, according to Meeting minutes, he showed no apparent remorse.

To his family and Quaker community, his decision would have been seen as a painful rejection of two of its core fundamental beliefs: violence and slavery were both immoral and wrong. The elders of Goose Creek Meeting put faith above their familial connection: Kirkbride faced “disownment.” (Disownment was not a shunning or excommunication; it meant the “disowned” Quaker could not vote or participate in Quaker business meetings and decision making.)

Kirkbride left the close knit village where he had been raised and moved to the newly formed state of West Virginia. He married out of the Quaker faith and became a physician. His 1913 obituary from the Keyser Tribune
gives tribute to a well lived life. However, it was a life that came with a high emotional cost.