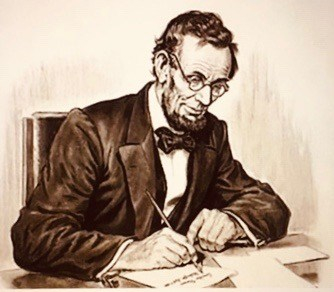 Caleb Russell left Goose Creek Meeting in Loudoun County, Virginia during the 1850’s in search of cheaper farm land and better opportunities. He eventually settled in Henry County, Iowa and became a leading Iowa citizen. Sallie Fenton’s family also moved to Iowa for similar reasons. Both Russell and Fenton were clerks at Prairie Grove Meeting, a meeting formed by pioneer Quaker families, many of them from northern Virginia.

As clerks of Prairie Grove Meeting, Russell and Fenton wrote a December 27, 1862 letter to President Abraham Lincoln, thanking him for the “Proclamation of Prospective Emancipation” which would go into affect January 1st, 1863. A transcript of the letter is below the handwritten image.

To Abraham Lincoln President of the United States

On behalf of the Religious Society of Friends, in the State of Iowa, whom we represent, we desire briefly to express to thee the very deep solicitude we feel that t[?] in the present perilous condition of the Nations [sic] life, thou mayest be favored to ask counsel of Him who holdeth the destinies of Nations in His hand. We desire to express our united approval of they late Proclamation of Prospective Emancipation. We believe it is intrinsically right and in the direction to bring about a permanent peace in our beloved country and we hope it may be carried out uncompromisingly. At this very late period we can do but very little more than bear our testimony in favor of justice and liberty and like Aaron in Him of old would gladly hold up thy hands as they did the hands of Moses.

Signed by direction and on behalf of the Monthly Meeting of the Religious Society of Friends of Prairie Grove in the State of Iowa this 27th of the 12th mo AD. 1862

Located in the “free state” of Iowa, Prairie Grove Meeting had members active in the abolitionist movement and working in the Underground Railroad. Most Quaker elders didn’t approve of law breaking, even if the law – such as the 1850 Fugitive Slave Act – was considered immoral. Prairie Grove Meeting’s abolitionist members lost the support of the more conservative Society of Friends’ leadership, causing a rift within the Quaker community.

However, by the time of this January 5, 1863 letter from President Lincoln to Prairie Grove Quakers, the nation’s Civil War was settling the issue of slavery once and for all. Whatever concerns conservative Quakers once had with abolitionism or Underground Railroad participation was history. This correspondence from President Abraham Lincoln sent to Caleb Russell and Sallie Fenton of Prairie Grove Meeting was a letter of which all Iowa Quakers, progressive or conservative, were surely proud.

The Honorable Levaton Harlan has just placed in my hands your letter of the 27th of December, which I have read with pleasure and gratitude.

It is most cheering and encouraging for me to know that in the efforts which I have made and am making for the restoration of a ‘righteous ‘ peace to our country, I am upheld and sustained by the good wishes and prayers of God’s people. No one is more deeply than myself aware that without His favor our highest wisdom is but a foolishness and that our most strenuous efforts would avail nothing in the shadow of His displeasure. I am conscious of no desire for my country’s welfare, that is not in consonance with His will, and of no plan upon which we may not ask His blessing. It seems to me that if there be one subject upon which all good men may unitedly agree, it is imploring the gracious favor of the God of Nations upon the struggles our people are meeting, for the preservation of this precious birthright of civil and religious liberty.